About Me and My Family 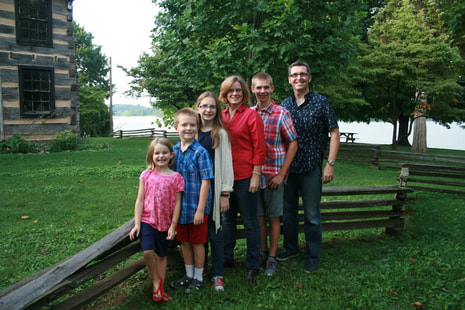 Aaron Keith Dale met Samantha Ruth Brown at a single adult activity at the Lexington branch of the Church of Jesus Christ of Latter-day Saints . That was in May 1999.  They got engaged after two weeks and were married after two months on June 29, 1999. They spent their first year living in Uof K campus housing where Aaron continued studying music education and percussion. Samantha ran cross country for Moorehead State University before transferring to
UofK. She ran for UofK for one semester then transferred back to Moorehead for a semester to finish an associates degree. A family was always in the plans, and on March 22, 2001 Samantha gave birth to Liam Keith; a 7 ½ lb. boy. After a couple years, Samantha again gave birth to a healthy and beautiful 8 lb. girl. Lindy Shannon – arriving right on her due date, July 22, 2003 at 9:30 am. What fun! Four years later, Lief Randolph arrived on the scene – a solid 8 lb 12 ounces – and has taken his turn at terrorizing the household ever since. On September 30, 2008, Liza Ruth was born.

Samantha grew up in LA County California and Aaron in Radcliff, Kentucky. Samantha is the second youngest of five children (four girls, one boy). Most of Samantha’s family live in Kentucky, with one brother in Utah and another in Missourri. Aaron is the oldest of five boys. All of the Dale brothers live in or near Vine Grove, Kentucky, where his parents reside.

Aaron began his teaching career at Bourbon County High School and Middle School (Paris, Kentucky) during spring 2002. There he taught choir and general music for one semester. The Dales moved to Vine Grove, Kentucky, in Fall 2002, when Aaron began teaching music at Woodland Elementary School in Radcliff (10 minutes north), and Percussion at John Hardin High School. In November 2005, they bought a house in Elizabethtown, Kentucky that seemed to be a good fit for the family of 6.  In 2012, Aaron transferred to G.C. Burkhead Elementary School in Elizabethtown - still teaching elementary music, and GCB moved into a brand new building the summer of 2015.

Samantha stays active running and enjoys playing piano and writing poetry. She coached cross country and track for East Jessamine Middle and High Schools during 2001-2002. She also worked as an instructional aid at the middle school. Since Liza finally started school, Samantha has been coaching again - this time at Central Hardin High School (West Hardin Middle) with the cross country team.  On top of teaching, Aaron directed the Louisville Times A Cappella Ensemble from October 2001 to July 2004. For several years, he directed the Kentucky Vocal Union, a barbershop chorus from Elizabethtown, Kentucky who placed 3rd in the world in the 2012 International Chorus Contest of the Barbershop Harmony Society.   The KVU has members all over the Kentucky, including several from out of state.  Through the years he has been active with the BHS, performing, coaching, and serving as a Certified Music Judge for barbershop contests. Aaron no longer teaches high school percussion, but he does run an after-school music program at the elementary school that includes an audition choir and drum group - giving him a chance to hack out some rudiments or play drumset on occasion. The family stays very active serving at church where Aaron and Samantha both have volunteer positions (callings).